The joint bid by Scotland and Ireland for the EURO Championship in 2008 has been unsuccessful. The Celtic bid, which had been rated as second favourite, finally trailed in fourth out of seven as Austria and Switzerland won the bid. 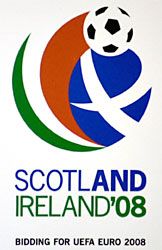 Scotland and Ireland have failed in their bid to host the European football championships in 2008. On Thursday, December 12, 2002, the UEFA decided that the European Championship was going to be held in Austria and Switzerland.

The Scottish-Irish bid for the EURO 2008 championships was heralded by the politicians and football administrators of both countries as one of the very best.

As Austria and Switzerland celebrated the success of their joint bid, the Scots and the Irish were dismayed to learn that their bid, thought to be one of the favourites, was never a serious contender.

A result no-one could quite believe. From a position of optimism generated by a highly impressive final presentation, potential winners had suddenly become abject losers. The Scottish-Irish bid finished a bitterly disappointing fourth place behind the winners, surprise runners-up Hungary and the joint bid from Greece and Turkey. Even so, the Celtic bid did finish above the Nordic bid despite the Scandinavians being one of the four recommended by the inspectors.

EURO 2008: history of a Celtic alliance

The idea of bidding for EURO 2008 first surfaced inside the Scottish Football Association (SFA) on January 2001. On May 2001 the SFA and the Scottish Executive gave their public backing in principle to the scheme after a report said there were no "insurmountable" problems. Scottish First Minister Henry McLeish pledged the full backing of the Executive to a solo Scottish effort.

On 8 November 2001, First Minister Henry McLeish resigned over an expenses scandal and Jack McConnell replaced him. During the weeks following his accession, the new First Minister held a series of meetings with officials and football experts, weighing up the pros and cons of submitting a bid for the tournament.

On 23 January 2002, First Minister Jack McConnell announced his decision to withdrawn the Executive’s support for a Scottish-only bid and go in with a joint Scottish-Irish bid. The First Minister said Scotland's decision to seek help followed a UEFA announcement in November that eight, and not six stadia would be needed by candidates to host the event: "As a football fan and a Scot I understand the excitement and enthusiasm behind the argument of Scotland going it alone. However, when it became apparent that eight stadiums rather than six would be required to stage the event, a solo bid was not an option. In economic terms, Scotland simply could not sustain eight major stadiums of the size required. That’s why we joined forces with our friends in Ireland to put forward a bid that combined the best of both our nations."

The offer to join Scotland was formally accepted by the Football Association of Ireland (FAI) in Dublin. On 27 February 2002, just before the UEFA deadline, a letter was sent to European football’s governing body announcing the Irish and Scottish intention to bid for the tournament.

"We can do it" - Celts confident as EURO bid was submitted

The seven candidates that confirmed their interest in hosting the EURO 2008 were Austria-Switzerland, Croatia-Bosnia-Herzegovina, Greece-Turkey, Hungary, Nordic 2008 (Denmark-Norway-Sweden-Finland), Russia, and Scotland-Ireland.

Scotland would provide six of the stadiums and Ireland two. Glasgow's Hampden, Parkhead, Ibrox and Edinburgh's Murrayfield already met the UEFA criteria. Simon Lyons, marketing director for the Scotland and Ireland bid said a positive factor about the Celtic bid was the fact it offered 1.7 million seats at the eight stadia which would be used. He added: "Our nearest rival is the Scandinavian bid, and they can only offer 1.2 million seats."

From the start, the unique selling point of the Scottish-Irish bid had been based on innate passion for football, an appeal that few could match: "This is not just a football tournament, it is about festival and fiesta and creating a carnival atmosphere", said Mr. Lyons. "The Irish fans showed they are experts at that over in Japan and South Korea and the Scots demonstrated that at the 2002 Champions League final in Glasgow, but anyway both nations have a reputation as fun-loving football countries."

Scotland's First Minister Jack McConnell added: "[EURO 2008] will raise the profile of Scotland and Ireland on the international stage whether we are successful or not." (...) "We shouldn't be overconfident, but I believe that, if we do this right and unite behind the bid, then we can win."

The FAI’s general secretary Brendan Merton believed that Ireland was not sufficiently prepared to make a success of the bid, but it was better to try and fail and learn from the failure than not to try at all: "2008 is probably that little bit too soon for us but it’s now or never so we just have to get on and work as quickly as we can with our Scottish counterparts."

Was the Celtic bid not as strong as that of other European countries?

The Scotland and Ireland bid failed on several counts:


» The unresolved question of which stadiums would be used in Dublin.

The joint Celtic bid for the EURO 2008 suffered a setback when the 80,000-seater Croke Park, Ireland’s biggest and best stadium, was ruled out of the bid by its owners, the Gaelic Athletic Association (GAA). GAA's Rule 42 prohibits the playing of "foreign sports" on Gaelic grounds. The Irish Rugby Football Union had also refused to open Lansdowne Road for the EURO 2008 unless a new stadium was built. Sources within UEFA’s bids inspection team confirmed that the unresolved question of which stadiums would be used in Dublin was one of the reasons for the failure.


» The concentration of too many stadia in only three cities.

UEFA officials did not like the presence of three stadia in one city. The bid’s over-reliance on Glasgow raised concerns over whether the police and the city's infrastructure could handle two major games on the same day.


» The perceived lack of political unity for the Irish Government.

UEFA chiefs were worried about the perceived lack of political unity for the Irish Government. Questions were raised over the ability of the Irish to agree on a new National Stadium, following a protracted dispute between Ireland’s governing coalition partners, Fianna Fail and the Progressive Democrats.

Scottish sports minister Mike Watson had urged restraint among journalists, fearing rival countries would seize on anything that suggested a lack of support for the bid in Scotland. But he could not block news of a BBC Scotland opinion poll which revealed than two-thirds of the Scottish public were against the Executive’s plans to spend £70 million to bring the EURO 2008 to Scotland. These findings were quickly picked up by the Swiss media and brought to the attention of UEFA figures on the eve of the decision. A UEFA official confirmed that the poll would have been considered before the championship was awarded. The SFA chief David Taylor said "The media put us under scrutiny, and that’s quite right. But the media in other countries do things differently, in terms of support for national projects. (...) The EURO 2008 bid has all-party support and backing from wide sections of the community - do I see that reflected in our media?."

Another reason that also came to light was that it would be inappropriate to stage another European Championship in the United Kingdom so soon after England hosted the 1996 event. The SFA chief David confirmed that "Previous tournaments had been around the west of Europe, and eastern Europe is developing fast. I think there was a feeling that ‘maybe we should take the tournament in this geographical direction’."

The SFA were convinced that they had friends in high places in UEFA who supported the bid. European football consultant, Alex Flynn, said "when it comes down to it, it is football politics that counts, and [Scotland and Ireland] they were found sadly lacking in this area". Political manoeuvring far outweighs technical considerations in the process of locating this hugely prestigious tournament, agreed SFA chief David Taylor: "the decision to award the championships is a very political one because there are millions of pounds at stake for the economies concerned, and huge prestige. You have to have a very clear political strategy, it cannot be a simplistic one."

Scotland and Ireland had by far the largest stadia of any of the bids and could have total ticket sales of 1.7 million - 500,000 more than anyone else. "Just because they [Scotland and Ireland] had more seats than anyone else doesn’t mean they necessarily had the biggest potential turnover", said Noel White, member of the UEFA national teams committee, "More details of financial figures were called for, in terms of ticket prices and other costings (...) maybe my colleagues felt that the business plan is where the Scots and Irish fell down in terms of being as financially viable as some of the other bidders and how achievable the championships would have been". The last major sporting tournament to be held in Scotland, the Rugby World Cup, was bedevilled by low turnouts, and football attendances outside games involving the Old Firm are low and still falling. Switzerland, by contrast, proved there is a bedrock of support for the game when they recently staged the under-19 European Championships, and enjoyed average crowds of 17,000.

Accusations on both sides of the Irish Sea

Scotland-Ireland 2008 bid director John Henderson had hoped that Celtic emotion could persuade European football’s governing body to bring the competition to Scotland: "UEFA know the people of Scotland and Ireland are emotional."

On Thursday, December 12, 2002, the UEFA decided that the European Championship was going to be held in Austria and Switzerland.

Accusations could be heard on both sides of the Irish Sea as the Irish blamed the Scots for bouncing them into the bid at the last minute and the Scots blamed the Irish for causing problems ever since the start.

It was estimated a successful bid for the EURO Tournament, the world’s third largest sporting event, would have generated around £50 million for the local economies and created more than 7,000 jobs.

Simon Lyons, marketing director of the Scotland-Ireland bid said: "It was a fair fight but Austria and Switzerland were always thought to be favourites and in this case that has turned out to be true. We are very disappointed of course, but we did our best and we wish them good luck."